END_OF_DOCUMENT_TOKEN_TO_BE_REPLACED

One of today’s most original accordion players, Martin Lubenov is a virtuosic musician, a comedian and a storyteller. Rooted in Bulgarian Romany music, his work fuses a lot of influences, from jazz through South-American dances to Irish folk music. The name of his Jazzta Prasta project derives from a Bulgarian expression (jasta prasta), which means tohu-bohu, a chaos pregnant with possibilities.

Like Lubenov, guitarist Angel Demirev is the descendant of an old dynasty of musicians. The special flavour and technique of his playing reveal a profound knowledge of the sitar and diverse oriental styles of lute playing, while his mode of performance still relies on the Balkan tradition, western rock and jazz. A real genius, he is dubbed “Raketa” (Rocket) for a reason. Mihail “Misho” Ivanov is counted among the best bassists: he studied jazz at the Conservatory of Amsterdam, and honed the classical foundations of his playing on the model of his father. 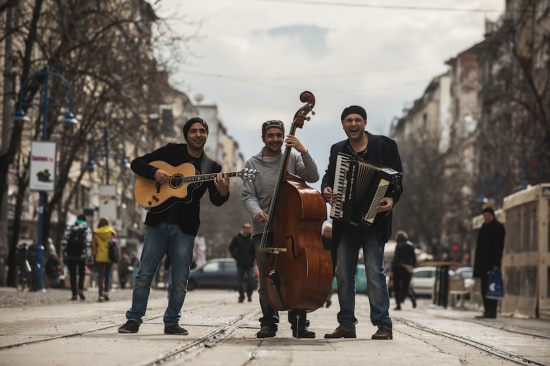